UC Irvine (+280), finally, is neither the one seed or favorite heading into this tournament. The Gauchos of UC Santa Barbara (-125) are deservedly odds on favorites heading to the start of this. Spoil alert: I absolutely love this team. They are a great mix of Power 6 athletes and scoring. This is a one-bid league, so I will be pulling for UCSB to make the tournament here. There is nothing crazy about this tournament format.

As mentioned above, I think this UCSB squad is a very live Cinderella story in this year’s tournament. However, UC Irvine swept UCSB this year, and UC Riverside (+350) also took them down. A potential sleeper in this tournament is CSU Bakersfield (+750). They are a first year D1 team, so they are not eligible for the NCAA Tournament, but they are a strong fourth team here. This tournament is being played in Vegas. 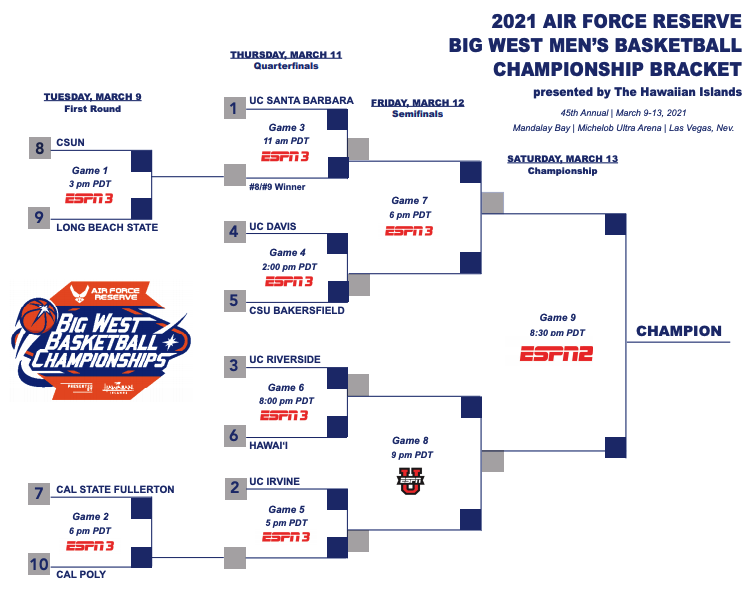 Kings of the Conference: UCSB

JaQuori McLaughlin is the best player in the conference, and the former Oregon St. transfer is backed up by former elite high school talent that teams in the Big West generally do not have. Amadou Sow, Miles Norris, and Devearl Ramsey are all players who had several Power 6 offers, or transferred from elite programs. They have put it together, and should be a scary NCAA Tournament matchup. I can not bet them at -odds, but I will be doing a mechanical moneyline parlay instead. (Follow us on Twitter @TheSharpSidePod for the daily staking and winnings)

I see this as a two horse race, with two other teams (CSUB and UCR) not too far behind. UCI beat UCSB very convincingly in their two home games. They do however, have a difficult path to the final, having to go through UCR. They play great defense, have close to elite rim protection, and are beastly on the glass. In a potential matchup with UCSB, they would have an inside advantage, despite being far less talented on the perimeter. The Anteaters are certainly live to grab the automatic bid.

What to Bet?: UCSB Mechanical Parlay 1u