Days before the world hit the shitter, Belmont won an incredibly exciting OVC championship game with a few seconds left on a backdoor layup. Belmont stud Nick Muszynski has missed time in recent weeks, which puts Belmont potentially in jeopardy, both they remain the best team and one seed in this conference. Muszynski will play, but to what capacity remains to be seen. All games will be played at a neutral site in Evansville. Prior to Muszynski’s injury which led to two losses at the end of Belmont’s season, Belmont likely had an argument for an at-large. They are now in a win-and-in scenario.

As mentioned before, Belmont (-125) has been the unquestioned best team in the conference, but when the status of one of your stars is in question, maintaining the level of dominance is difficult. Morehead St (+250) has the conference’s unquestioned best defense, and is led by the stellar play of freshman Johnni Broome, a truly elite shot blocker. Austin Peay’s (+2000) Terry Taylor is the best player in the league, but that statement alone understates how important he is to his team. He and teammates Mike Peakes carry that team, but recent play makes me want to stay away. Eastern Kentucky (+800) and Jacksonville St (+1400) are other contending teams that could make a run, but the difficult first round matchups make things somewhat difficult. 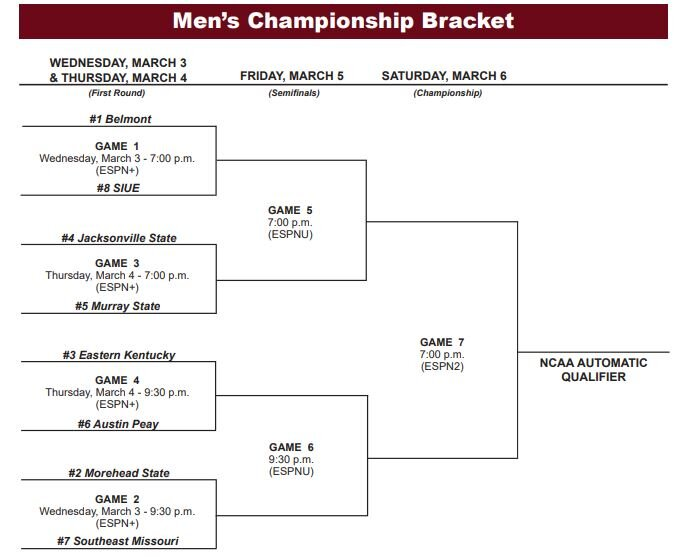 Kings of the Conference: Belmont

As mentioned before, this is the best team in the conference. The combo of Nick Muszynski and Grayson Murray has been outstanding all year. This team is borderline unstoppable when both players are playing well. Outside of a mind-blowing loss to Samford at the beginning of the year, with Muszynski on the court, Belmont has not lost and has won all but four games by double digits. Jacksonville St gave them the most combined trouble over their two games (more on them below). Muszynski must play, however, if Belmont would like to continue this dominance.

Jacksonville St slows you down and makes you play at their pace. They protect the rim well, and are incredibly efficient scoring inside. They have the ingredients of beating Belmont. If they push through Murray St, a team they have beaten twice, they would meet up with the Bruins in the semis. This is a well-balanced team that does not rely too heavily on one player, which in a tournament format is conducive for a futures bet here. At 14/1, I am ready and willing to back Jacksonville St. with the hopes that I have guaranteed a team in the championship.

Who is Worth a Bet?: